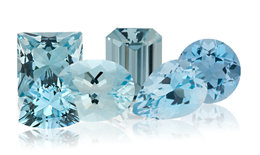 With color reminiscent of tropical oceans, it's no surprise this gemstone's name derives from Latin for "water of the sea." The Romans believed aquamarine absorbed and protected young love, making it an ideal romantic gift. It is the 16th and 19th anniversary gemstone, as well as the birthstone for March.

Colorado claims aquamarine as its state gemstone, but Brazil probably has more bragging rights after discovering an aquamarine of 243 pounds, which was eventually cut into stones of more than 100,000 carats. This light blue beauty has long been a favorite of jewelers and consumers alike.