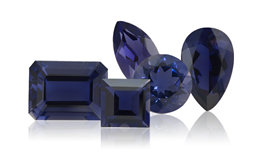 Derived from the Greek word for "violet," the soothing color of this gem gives it its name. An interesting property of this iolite is what is known as "pleochroism," that is, its color changes with the direction of the light that illuminates it. Iolite can appear violet blue, clear or even golden yellow, depending on the source of light. Because of this property, the Vikings used iolite on their voyages to determine the direction of the sun in dense fog, overcast conditions and even when the sun was below the horizon, giving it the name Vikings' Compass.

Often given to celebrate the 21st anniversary, iolite is mined in many locations. Recent explorations of deposits in Wyoming revealed a specimen of more than 24,000 carats.

...we don't currently have this item in stock.
Please add your email and we'll notify you when it's back in stock.
Showcase » Gemstone Jewelry » Iolite
Price
Sort
Show
Keyword